The HDR research team completed their first aerial surveys of the year as part of the Navy’s baseline data collection effort for the Norfolk Canyon study area off the coast of Virginia on 9 and 11 April 2018. These surveys resulted in sightings of some exciting animals, including several endangered species! In total, there were 51 sightings of over 600 individuals, representing 11 marine mammal species across two days of aerial surveying. 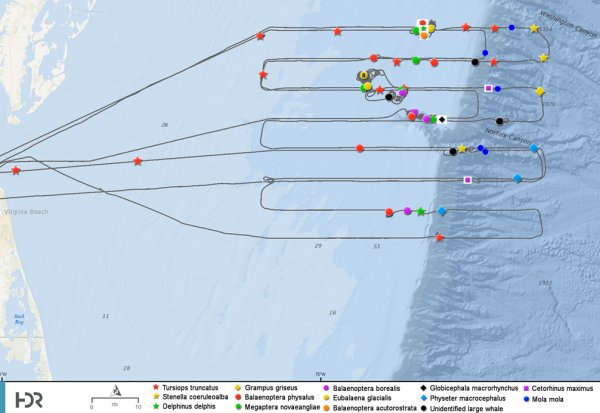 Tracklines and sightings from aerial surveys conducted on April 9 and 11 in the Norfolk Canyon study area off the mouth of the Chesapeake Bay.

The team’s very first sighting on 9 April included five critically endangered North Atlantic right whales at the northern end of the study area, approximately 70 miles northeast of Virginia Beach. Right whale mortalities were alarmingly high in 2017, no new calves were reported this winter, and overall detections of right whales were low throughout the winter calving season. The sighting was immediately reported through NOAA's North

Atlantic Right Whale Sighting Advisory System (SAS) and a temporary Dynamic Management Area (DMA) was established to warn mariners of the presence of these highly endandered whales - only approximately 450 individuals remain in the population. Within the same sighting, the team also observed five humpback whales, three endangered fin whales, and a minke whale, all feeding in the immediate vicinity. The humpbacks were bubble net feeding, where whales blow bubbles in a spiral to trap and concentrate prey, allowing them to swim up through the center of the bubble “net” to feed. Other notable sightings on the survey included Risso’s dolphins, striped dolphins, and common dolphins. In addition to marine mammals, several basking sharks were also observed feeding on zooplankton prey. 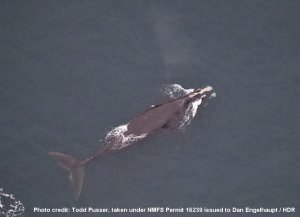 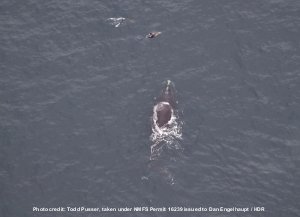 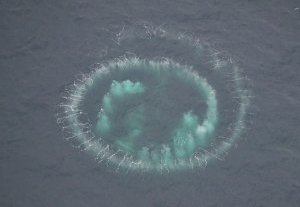 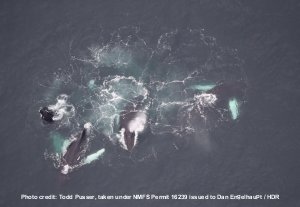 On April 11 HDR ran a boat-based visual survey as part of the Mid-Atlantic Outer Continental Shelf Break Cetacean Study in addition to the aerial survey. The vessel crew's first sighting was a humpback whale, but soon they received a call that the aerial team had again located right whales. The boat headed to that area and had 12 sightings of 5 species – including three right whales (one of which was a resighting from the previous day). A fecal sample was collected from the right whales, which will be sent to other researchers for analysis. Other species sighted included five endangered fin whales, three more humpback whales, and common dolphins. However, perhaps just as notable as the right whale sightings was a sighting of a juvenile blue whale. This blue whale sighting may be the first photographic record of this species in the area, with only sightings known from further offshore as part of NOAA’s AMAPPS surveys and an offshore tag track from an individual tagged off Canada. The Aerial team also had a sighting of an endangered sei whale. 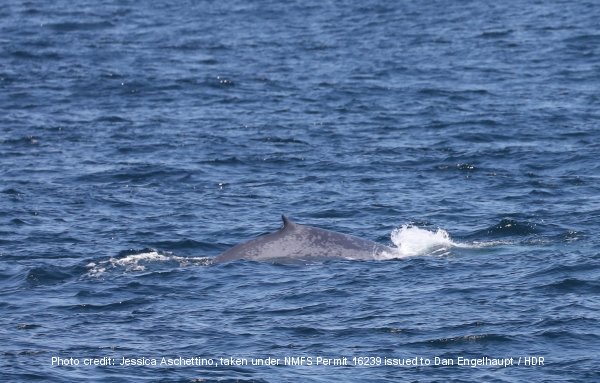 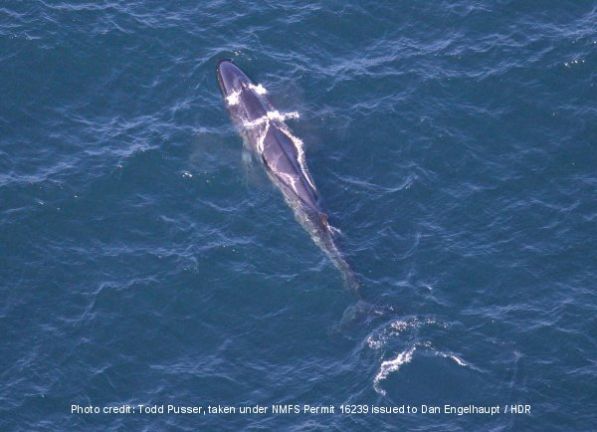 Thanks to the extensive cataloging effort coordinated by the New England Aquarium, identities of the six individual right whales are known-- five males and 1 mature female. More information on these whales can be found in the online North Atlantic Right Whale Catalog by searching for the individual catalog ID numbers.

The U.S. Navy routinely conducts training and testing activities in the Virginia Capes Operating Area (OPAREA) off the mid-Atlantic, including the Norfolk Canyon area and the near shelf break, so the data collected from these surveys provide valuable information on what species are found in the area, as well as trends in habitat use, distribution and abundance.