Researchers from HDR Inc. and NAVFAC Atlantic assisted with ongoing disentanglement efforts on Tuesday (1/5/2021) to free a young humpback whale just off the coast of Virginia Beach that had become entangled in fishing gear.  The individual was first observed on Saturday (1/2/2021) by a whale watching trip operated by Rudee Tours.  The whale was alone and towing a small red buoy and about 50ft of line. The gear is believed to be from a crab pot based on the size of the buoy and relatively thin line. 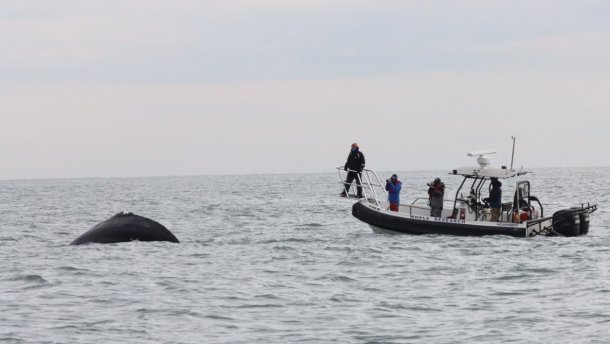 Juvenile humpbacks commonly visit this area during the winter months and typically spend days to weeks in the shallow coastal waters before moving on.  Previous research has shown that some individuals return in subsequent years, and the broader area may act as a supplemental winter feeding ground for the returning whales (Barco et al. 2002).  Entanglements and vessel strikes are a significant cause of injury and mortality for humpbacks as well as several other large whale species. In April 2017, NMFS declared an Unusual Mortality Event (UME) for humpback whales in the Atlantic from Maine to Florida based on elevated mortalities of this species.  It has also been documented that humpbacks visiting the coastal Hampton Roads area show an affinity for shipping channels at the mouth of the Chesapeake Bay, putting them at increased risk of vessel strikes (Aschettino et al, 2020).

HDR Inc. has been conducting a research project focused on humpbacks in the coastal waters of Virginia since 2015 under the U.S. Navy’s Marine Species Monitoring Program.  This project has been documenting the seasonal occurrence of humpbacks and their behavioral ecology through the use of visual surveys, photo-identification, biopsy sampling, and telemetry tagging. On Tuesday morning, researchers from HDR and NAVFAC set out of Lynnhaven Inlet at the mouth the Chesapeake Bay for a routine survey and quickly resighted the entangled humpback just off Cape Henry.  They spent over two hours collecting photos and aerial drone footage while coordinating with the Virginia Aquarium & Marine Science Center Stranding Response Team, U.S. Coast Guard, Virginia Marine Police, and National Marine Fisheries Service on the next steps.  The research team was asked to deploy a satellite-linked telemetry tag that can be used to remotely track the location of the whale for up to several weeks. A Smart Position and Temperature (SPOT) tag was successfully deployed which will allow the whale to be tracked and relocated by disentanglement experts who hope to eventually free the whale of the gear.  A biopsy sample was also collected which will be used to determine the whale’s sex and also assess other genetic and ecological factors. Preliminary analysis of photos has confirmed that this particular individual was originally identified by the project last winter and is a return visitor. This information will be a valuable addition to the Mid-Atlantic Humpback Whale Catalog, for which several of the organizations involved with the disentanglement effort are contributors. 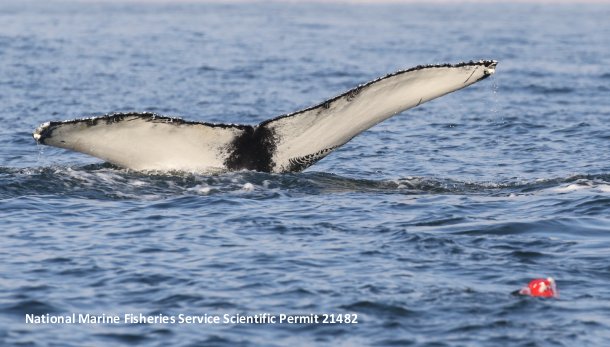 Tail fluke of the humpback as it goes down for a dive. The red buoy in the foreground is attached to the whale by a long piece of line likely entangled around one of the whale's pectoral fins

The telemetry tag can be seen on the whales' dorsal fin. The fin had been damaged at some point about a year ago but looks to be completely healed.

Please remember to keep a safe distance from any marine mammals you may encounter on the water and follow guidelines for safe whale watching. Whale disentanglement should only be attempted by trained and permitted individuals. For more information, please visit the Center for Coastal Studies.