Researchers from HDR Inc.’s marine sciences team departed Virginia Beach on a calm clear morning on February 21 in search of baleen whales. Within less than an hour, the team spotted multiple fin and humpback whales approximately 13 miles from shore. While some members of the team focused on photographing whales to identify individuals, the others continued scanning the area for additional whales. From a distance, a whale was seen in a current line (where two water currents converge, visible by a line of disturbance on the surface). Once the whale turned and showed a side-profile of its head, it was identified as a critically endangered North Atlantic right whale. 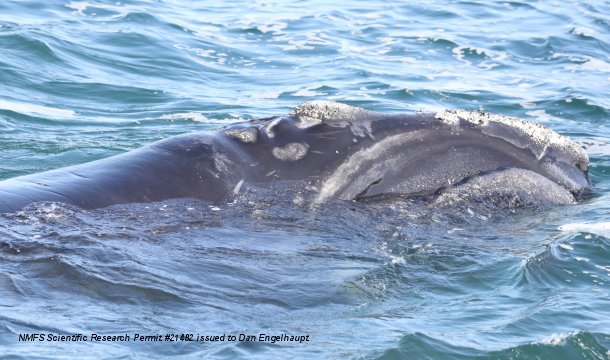 A drone was launched to collect photos and video for identification to be compared against a catalog of known individuals and was later identified by researchers at the New England Aquarium and Florida Fish and Wildlife Conservation Commission as a yearling (2021calfof3232), first sighted as a calf of mother ID 3232 (a.k.a. Lobster) in May 2021 swimming off Brier Island, Nova Scotia (https://www.neaq.org/about-us/news-media/press-kit/press-releases/18th-north-atlantic-right-whale-mother-and-calf-discovered-off-brier-island-nova-scotia/). Estimates of total length were made from the drone video and determined to be approximately 22 feet long, which concurs with known age-class.

The telemetry tag can be seen in the center of the animal's back. It transmits data on the animal's movements and diving behavior back to researchers through satellites.

This whale, like the yearling tagged in March 2021 (link), was curious about the boat and made a very close approach while the vessel remained in neutral. With an assessment by the team that the whale was not a reproductive female, not in poor health nor entangled in fishing gear, a decision was made to deploy a satellite-linked telemetry tag that records movement, diving, and surface behaviors. Based on the time of year we expected this whale to remain in the general Mid-Atlantic area off VA/NC or possibly move north towards well-known seasonal feeding grounds, but did not expect it to move SE towards the calving grounds. After 8 days of monitoring, the whale is continuing off the coast of SC, apparently on a journey towards Florida. 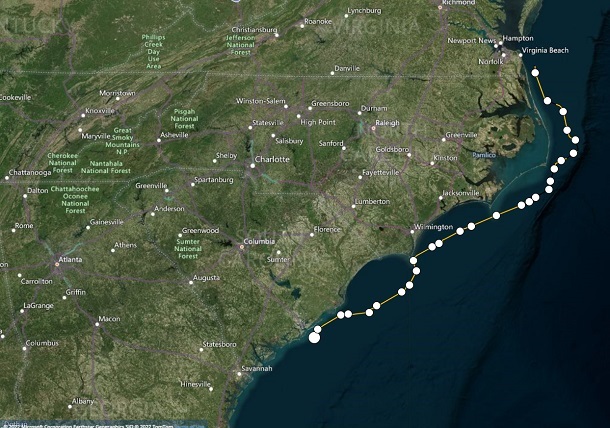 Track showing the movements of the whale over approximately 8 days starting from the tagging location off the coast of Virginia Beach.