Woods Hole Oceanographic Institute recently deployed an acoustic detection buoy off the coast of Cape Hatteras, North Carolina supporting the U.S. Navy’s Marine Species Monitoring Program. The monitoring buoy has the ability to detect and classify whale vocalizations using a digital acoustic monitoring instrument (DMON) and sophisticated analysis software to listen for whales and send notifications and data to researchers in near-real time. For more information on how this system works, check out the WHOI’s Robots4Whales website. 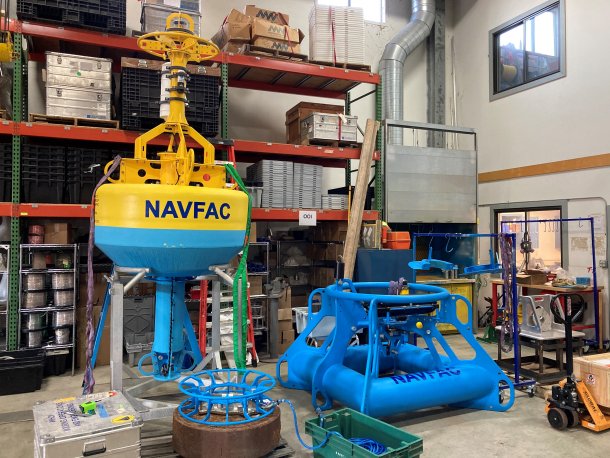 The monitoring buoy and its mooring were built and tested at Woods Hole Oceanographic Institute.

Although the buoy is capable of detected several large whale species including fin, sei, and humpbacks, the primary intent is to monitor for the presence of critically endangered North Atlantic right whales. Many individuals of this species migrate annually between summer feeding areas in the north and winter breeding habitat off the coast of Georgia and Florida. Comparatively little is known about their occurrence and behavior when not at these seasonal areas of concentration, and the mid-Atlantic region is of particular interest the U.S. Navy due to the concentration of training activities as well as vessels moving in and out of Naval Station Norfolk. 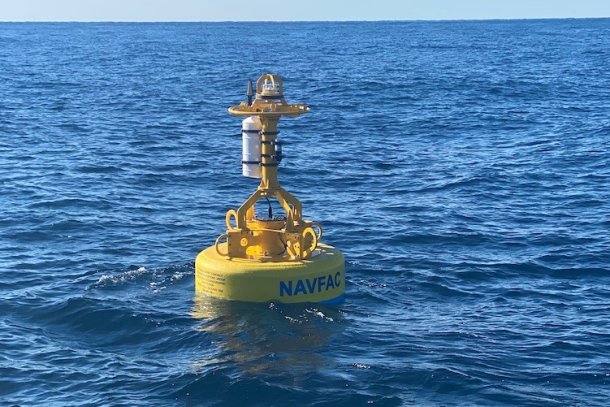 The buoy was deployed on December 3, 2020 approximately 30km off the coast of Cape Hatteras, NC.

The buoy investment has quickly begun to pay off with many positive acoustic detections over the past month.  Two of those detections have also resulted in visual observation of 12 adult North Atlantic right whales.  Two separate flights were able to locate groups of whales after acoustic detections by the buoy were confirmed by NAVFAC Atlantic analysts on January 5th and 10th. The analysts coordinated with project partners at Duke University and an aerial survey team from Clearwater Marine Aquarium who are currently providing mitigation and monitoring support to the Army Corp of Engineers. Right whale vocalizations were detected by the buoy on the morning of January 5th and confirmed by analysts within a few hours. By about 3pm the aerial survey team was able to locate a group of four adult right whales in the vicinity of the buoy. Thanks to coordination between multiple research groups, it only took about 6 hours between the initial acoustic detection of the right whales, and aerial observers sighting the animals, which has resulted in a voluntary 10-knot speed reduction zone, known as a Dynamic Management Area. Another acoustic detection on January 10th resulted in the same aerial survey team making an observation of eight North Atlantic right whales near the buoy the following day, within in the area protected by the DMA. The DMA will remain in effect until January 25th unless additional visual observations are made.

Acoustic detection data for the monitoring buoy are publicly available at http://dcs.whoi.edu/ncch1220/ncch1220_ncch.shtml.