In February 2014 the Duke University Marine Lab and Syracuse University started a Navy-funded monitoring project off Fernandina Beach, Florida to place DTags on North Atlantic Right Whales (NARW) (Permit 14791 Issued to Dr. Douglas Nowacek).  The primary purpose of this project is to collect data on movements and vocalization rates of right whales off the GA/FL coasts on the winter breeding grounds.  See the project profile for additional information.

On February 16th the Duke Marine Lab crew, aboard the R/V RT Barber, sighted a NARW approximately 40 miles east of Jacksonville, Florida. The UNC Wilmington aerial survey team (NOAA Scientific Permit 16473 Issued to UNCW) was also conducting surveys off-shore in the same area for the Navy and was able to coordinate for a visual on the animal and a refined location as it was traveling subsurface. Upon arrival the aerial survey team noticed the whale was entangled and directed the R/V RT Barber and R/V Stellwagen, a Duke-contracted vessel also involved with the tagging project, to the animal. which was later identified as Eg4057. The entanglement was wrapped around the upper jaw with a knot above the eye and 100 feet of line trailing behind the left side of the animal. The UNC Wilmington aerial survey team called Florida Wildlife Commission (FWC) and provided them a location and entanglement information. During this time the R/V RT Barber crew placed a DTag on the whale. 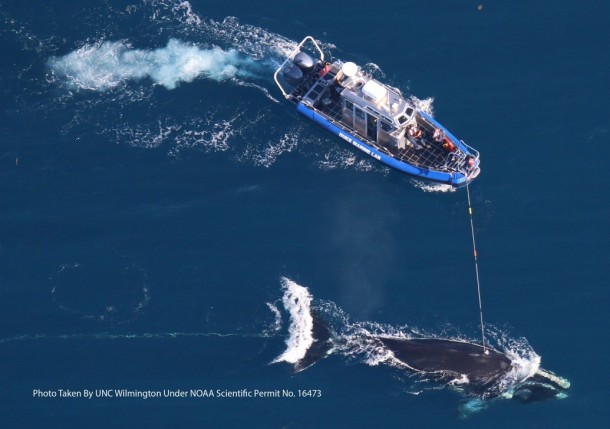 Researchers from Duke University aboard the R/V RT Barber deploy a suction-cup DTag to entangled right whale #4057. The tag was used to collect movement and acoustic data while also helping to track the position of the whale while waiting for a disentanglement team to arrive. 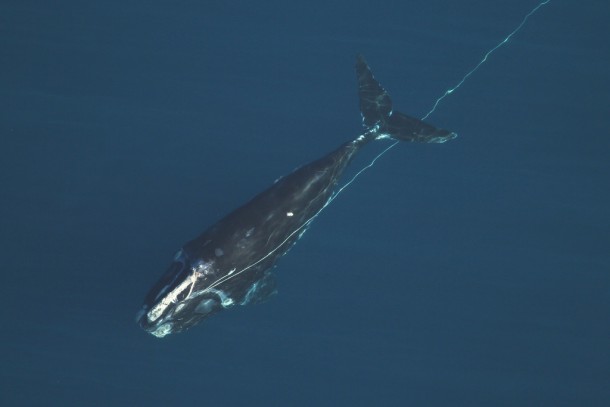 Right whale #4057 was dragging over 100 yards of heavy 9/16" diameter fishing rope. A boat team from Duke University conducting research nearby was able to attach a suction cup mounted tag (small white rectangle on whale's back) to temporarily track the whale's movements.. Photo by Florida Fish and Wildlife Conservation Commission, taken under NOAA permit #15488.

FWC sent a plane out to take over documentation of the entangled whale and also launched a vessel to attach a telemetry buoy to the animal. The Duke team was asked to stay with the whale until the FWC vessel arrived.  Responders from the Florida Fish and Wildlife Conservation Commission arrived shortly before dark and attached a satellite tracking buoy to the fishing rope, so the whale could be relocated and disentangled the following day. The R/V Stellwagen stayed with the whale through the duration of FWC’s efforts.

On February 17th the whale was relocated with the telemetry buoy approximately 60 miles north of its last know location the previous day. The FWC aerial survey team located the animal and researchers from FWC and Georgia Department of natural Resources were able to make an attempt at disentanglement.  Most of the line was successfully removed and it is hoped that the whale will be able to shed the rest of the gear itself. 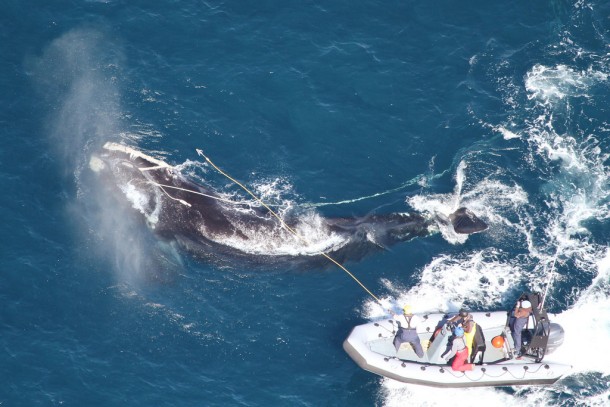 This event represents an impressive team effort between multiple groups working on right whale research and conservation.  Interestingly, the first sighting of the entangled whale occurred beyond the eastern-most end of the Early Warning System (EWS) survey area and might not have been detected on that day if it weren't for the monitoring research being conducted from the vessel.  Responders were not able to remove all the rope due to the whale's evasive behavior, and because the rope was likely entangled through the whale's baleen. Responders hope that the whale will be able to shed the remaining rope on its own, but only time will tell. The occurrence of right whales in this area is of interest and concern to all parties, and hopefully #4057 will soon be seen gear free. 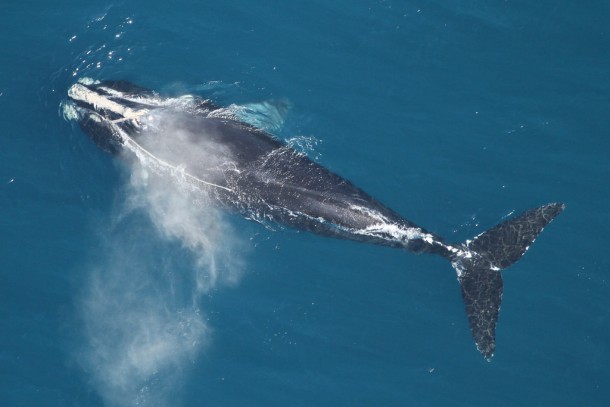