This winter marks the fourth season of the Mid-Atlantic Humpback Whale Monitoring Project taking place off the coast of Virginia Beach, VA. This project has enabled the U.S. Navy to learn an incredible amount of information on how humpback whales are utilizing and behaving in important Navy training areas. Each year, a few more pieces of the puzzle are added to our understanding of this species’ habitat use, site fidelity, seasonal movements, and interactions with vessels.

On 29 December 2017, researchers from HDR Inc. were able to observe six whales off the coast of Virginia Beach, VA while conducting a nearshore survey. Satellite tags were deployed on two previously tagged/biopsied individuals – HDRVA012, a female seen in all four seasons and tagged last year, and HDRVA064, a female seen over the last three seasons and tagged also last year. Gender information is known due to biopsy sample analysis performed by researchers at Duke University.

This is the first time that tags have been deployed on the same humpback whale in consecutive years in the Mid-Atlantic. It’s an exciting opportunity to examine inter-seasonal variation among individual humpback whales frequenting this area. Unfortunately, the more recent tag for HDRVA012 only lasted 5 days so data is limited. However,  HDRVA064 is providing some interesting data already. Although the whale individual was tagged in similar locations, the behaviors after the two tagging events were quite different. During the 10 days in which data was received from the December 2016 deployment, HDRVA064 remained off the coast of Virginia Beach and spent a significant amount of time in the shipping channels at the mouth of the Chesapeake Bay. During the 14 days in which data has so far been received for the December 2017 deployment, HDRVA064 spent some time near the month of the bay, but has taken multiple trips south off the coast of North Carolina and also spent time offshore (up to 25 NM). One big difference between these two deployments was the weather during this time. Average water temperatures for the area were 6.6 degrees cooler during the 2017 deployment due to a winter storm hitting the area. Such temperatures differences may have had an effect on the prey that the humpback whales are feeding on. 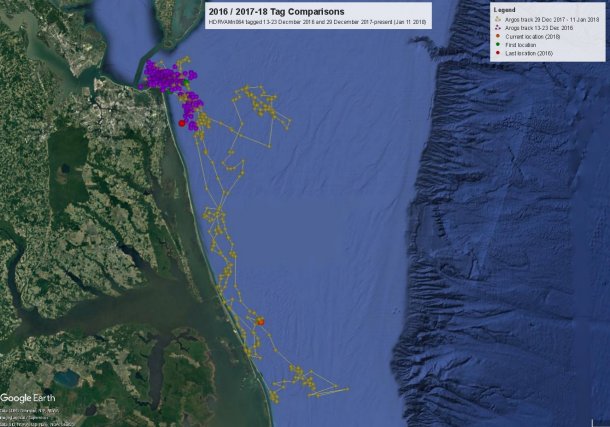 Maps of the location data from the 2016 tags for humpback whale HDRVA064, compared to the tags on the same animals in 2017.

Humpback whales have been shown to spend a lot of time in the shipping channels near the Chesapeake Bay Bridge Tunnel, where the deeper waters of the channels likely offer increased feeding opportunities. This finding is not completely surprising given the number of ship strike deaths of humpback whales in the area, and may have implications not only for the Navy but for other human activities in the area such as commercial shipping. Mitigating for whales in an area where the shipping channel is in a fixed location due to the bridge tunnel presents a unique challenge. Navy lookouts have proven to be effective at spotting humpback whales in the shipping channels in this area and have implemented mitigation measures to reduce their speed in order to safely pass. 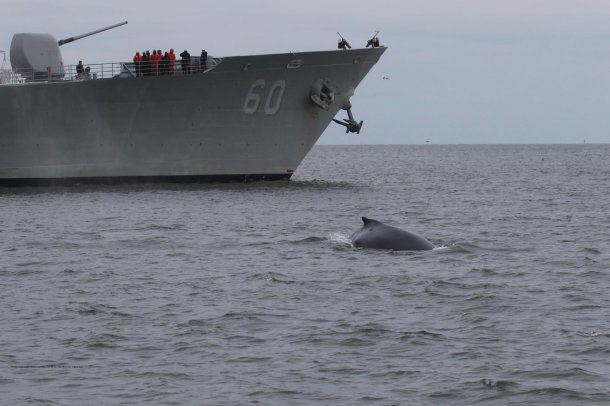 The U.S.S. Normandy CG 60) modified their speed to safely pass a humpback whale on January 6, 2015. Sailors can be seen observing the whale from the bow of the ship.

All research on this project is conducted under National Marine Fisheries Service (NMFS) Scientific Permit 16239 held by Dan Engelhaupt. Please remember to keep a safe distance from any marine mammals you may encounter on the water.