The National Aquarium and Virginia Aquarium & Marine Science Center recently partnered to release four juvenile loggerhead sea turtles named Findlay, Rooney, Portsmouth, and Grenada at Sandbridge, Virginia on October 20, 2013. The animals were all treated for a range of injuries and illnesses and were in rehabilitation for varying amounts of time. While all four animals have unique rescue and rehabilitation stories, three of the four now have one significant factor in common, which is that they are all taking part in a significant piece of research.

The U.S. Navy is supporting the Virginia Aquarium to conduct research that will provide valuable insights into sea turtle habitat use of the Chesapeake Bay and coastal Virginia waters. The project funds the deployment of acoustic transmitters and satellite tracking tags on rehabilitated and released sea turtles like Findlay, Rooney, and Portsmouth with the goal of learning more about residency times, migration patterns, and foraging areas within the Chesapeake Bay and surrounding waters.

Acoustic transmitter tags are commonly used for tracking fish. They work by emitting a sound signal or ‘ping’ that can be detected by networks of underwater receivers, commonly referred to as arrays. These acoustic monitoring arrays are installed in many coastal areas, including the Chesapeake Bay and have been valuable for understanding migration patterns and habitat use for many fish species – including endangered sturgeon species. For the purpose of tracking sea turtles, the acoustic tag is small enough to be applied to the shell of smaller green and Kemp’s ridley sea turtles using a low temperature epoxy. Each tag transmits a specific coded signal that is used to identify the individual as it moves from one location to another. As the turtle moves around areas where receiving arrays are present, the arrays detect the pings from the tag and record the information, which is later downloaded by researchers for analysis. For these turtles, the acoustic tag also emits a signal that indicates the approximate depth of the turtle when it is in range of the array.

Findlay, Rooney, and Portsmouth were also equipped with data logging satellite telemetry tags produced by Wildlife Computers and the Sea Mammal Research Unit.  These tags can record the behaviors such as dive depth and duration and transmit that data back to researchers via satellites.  In addition to the recorded data each transmission also includes the GPS coordinates of the individual so that their movements can be tracked over long ranges. Initially, the satellite tags will be used to ground truth the acoustic tags by letting us know when the turtles were close enough to the acoustic array for a signal to be detected.

The goal of this project is to leverage the Navy's existing underwater passive acoustic receiver array initially established to track sturgeon and the expertise of Virginia Aquarium researchers to tag sea turtles to gain insights into how sea turtles utilize the Chesapeake Bay and surrounding waters for foraging and migrating. From the underwater acoustic arrays and tags we hope to learn about residency time and migration patterns by being able to tag more turtles at less cost. Some turtles will be double tagged with satellite and acoustic tags to help ground truth the performance of the acoustic receiver array and inform the placement of future acoustic receiver elements. Analysis of data will be performed jointly by researchers at both the Navy and Virginia Aquarium. 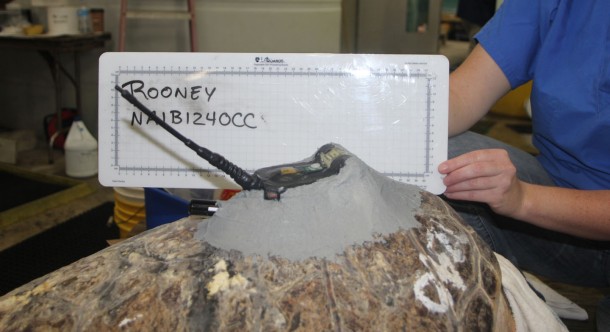 You can read more about Rooney and Portsmouth’s rehabilitation on the animal profiles page of the National Aquarium’s website and you can track the progress of Findlay, Rooney, and Portsmouth on SeaTurtle.org. For more information on the U.S. Navy’s Marine Species Monitoring Program please visit their web portal. Funding for the tagging work is provided by U.S. Fleet Forces Command and technical project management and collaboration on data analysis is being provided by Naval Facilities Engineering Command Atlantic.

You can also make a tax-deductible contribution to support sea turtle rehabilitation at the Virginia Aquarium Foundation and the National Aquarium.