Seals - The Sun-bathing Beauties of Rhode Island and Virginia

Narragansett Bay:  An intertidal ledge near Naval Station Newport is surveyed weekly for hauled out seals at low tide.  Harbor seals were observed hauled out during 24 of the 46 survey days (52% of the days sampled) during the 2014-2015 field season.  The number of seals counted ranged from 0-44 seals.  Data were collected on the following environmental parameters:  air and sea surface temperature, wind speed and direction, visibility, tidal height, Beaufort sea state, and cloud cover.  A correlation analysis did not reveal any strong relationships in the environmental and seal count data.  There was a noticeable drop in seal presence on the haul-out site in February 2015 when the sea surface temperature dropped below freezing.  During this time, large pieces of ice were covering the haul-out site and much of Narragansett Bay.  The other noticeable change in seal presence occurred in May 2015 when both air and sea surface temperatures began to rise and seal presence decreased as seals left Narragansett Bay for the season.

The second aspect of the study was to analyze historic data provided by Save the Bay, a local not-for-profit organization that has been collecting volunteer observations on seal presence in Rhode Island since 1992.  Data from 1992-2013 was analyzed for 112 locations throughout Narragansett Bay, Mount Hope Bay, the Sakonnet River, and the Atlantic Ocean coastline.  The haul-out site with the greatest number of total observations was Rome Point, with a total of 2,412 observations.  Most years had over 100 observations per year.  The maximum number of seals observed at Rome Point in one year was 183 in 2005.  A linear regression analysis of the seal count data showed a positive trend from 1994 – 2011. Rome Point may serve as a good indicator of increased seal usage throughout Narragansett Bay, based on the large sample size and the consistent sampling effort.

Surveys are currently underway in Rhode Island for the 2015-2016 field season.  Observations of the haul-out site began in August 2015, but seals were not seen until November 5th, when thirteen seals were counted.

Lower Chesapeake Bay: In Virginia Beach, VA, NAVFAC LANT surveyed four different haul-out sites on the Chesapeake Bay Bridge Tunnel (CBBT). Seals were sighted on 12 of the 13 survey days from November 2014 to May 2015 with peak counts in March. Harbor seals were observed during most of the surveys; with 1 gray seal observed on February 25th. The number of seals counted ranged from 0-26 seals. The seals were frequently observed hauling out at two of the four CBBT islands. Similar to NUWC’s observations, arrival and departure of seals seemed to coincide with changes in air and sea surface temperature.

For the 2015-2016 field season, surveys commenced in October to improve documentation of arrival to the study area (in 2015 they were not sighted until early December). The number of seals observed has been steadily increasing since the first season’s sightings. Most sightings have been of harbor seals, but again a single grey seal was sighted in February. Concurrent counts are now being conducted with The Nature Conservancy to account for seals at a nearby haul-out site on Virginia’s Eastern Shore.

Photo-ID Analysis and Results: Photographs of seals have been and continue to be collected in order to identify and compare individual seals to assess site fidelity and movement among haul-out locations. We are using WILD-ID to conduct photo-identification of the seals in Rhode Island and Virginia. Preliminary analysis in WILD-ID has yielded 13 matches after processing 156 photos from the Narragansett Bay study site. Photographs from the lower Chesapeake Bay study site are currently being analyzed. 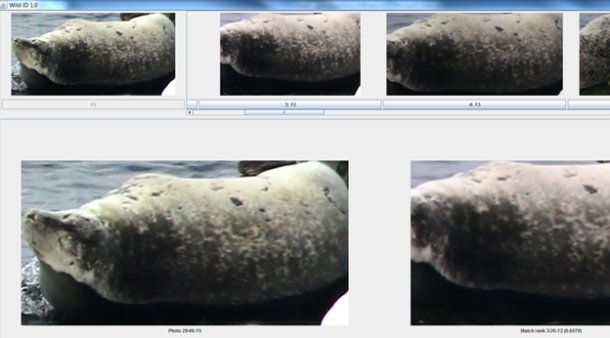 A screenshot of the photo analysis process in WILD-ID.