Scientists from HDR and NAVFAC Atlantic had a rare and exciting encounter during a recent survey conducted for the Mid-Atlantic Continental Shelf Break Cetacean Study - a group of three Sowerby’s beaked whales (Mesoplodon bidens).  The group was sighted approximately 85 miles offshore of the Eastern Shore of Virginia, about halfway between the Norfolk and Washington Canyons, and represents one of the southern-most records of this species. 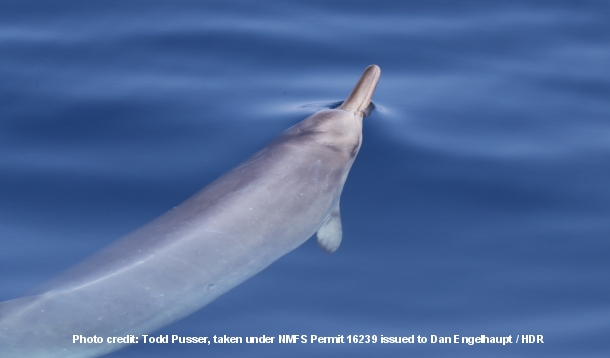 Sowerby’s beaked whales have a relatively bulbous melon, a long rostrum, and a pair of small teeth that erupt above the gumline near the middle of the lower jaw in adult males only. The group encountered consisted of two probable adult females and a juvenile.

Sowerby’s beaked whales are known mainly from the colder waters of the North Atlantic, from Massachusetts to Labrador in the west, and from Iceland to Norway in the east (see OBIS-SEAMAP for additional details and sighting records). Only a handful of sightings exist off the mid-Atlantic of the U.S., primarily North of Wilmington Canyon off the coast of southern Delaware, with one animal sighted at Poor Man’s Canyon off the Virginia/Maryland border by NOAA’s Northeast Fisheries Science Center (NEFSC). 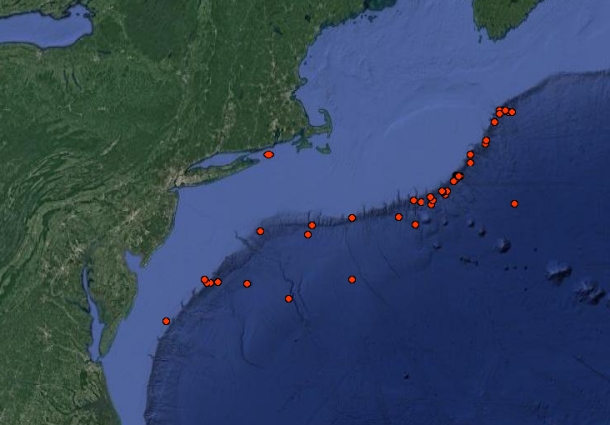 Sowerby's beaked whales have also been detected consistently throughout the year on a high frequency acoustic recording package (HARP) deployed between the Washington and Norfolk Canyons (~1000m depth) from April 2016 through June 2017 as part of the passive acoustic component of the Baseline Monitoring for Marine Mammals in the East Coast Range Complexes project conducted by Duke University. So while Sowerby's beaked whales seem to be a regular inhabitant of this area, they are very rarely observed from visual surveys.

The team was able to track this group for three surfacings and although initially sighted traveling, they became curious and made a close approach, traveling alongside the bow of the boat. This close approach and near perfect sea conditions allowed a Wildlife Computers SPLASH10 location-dive tag to be deployed on one of the adults in the group, which, as far as we know, is the first tag to be deployed on this elusive species.  This tag records diving behavior and transmits that data long with location information through the Argos satellite system. we can now get a glimpse into the movements and behavior of this species in the Mid-Atlantic and potentially beyond for as long as the tag remains attached and active.

Sowerby's beaked whale being curious near the survey vessel during the tagging attempt. 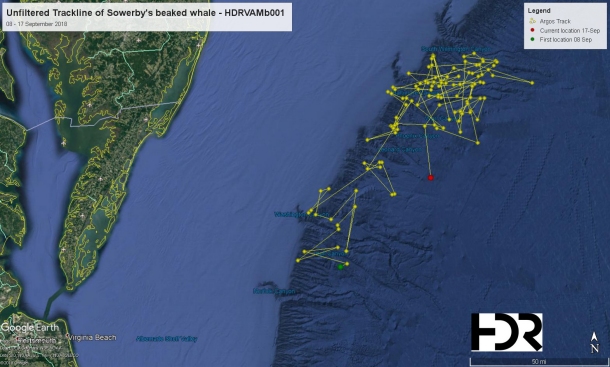 Map showing movements of the Sowerby’s beaked whale over the initial ten days of tag deployment. Note that the ARGOS locations shown are unfiltered at this stage. Green dot is approximately the tag deployment location and red dot is the most recent reported location.