On 03 August the research team from HDR completed their 12th survey of the year in the offshore waters near the Norfolk Canyon, over 65 miles off the coast of Virginia. There were 27 sightings of marine species for the day, including sightings of bottlenose dolphins, pilot whales, sperm whales, fin whales, and loggerhead sea turtles. Both fin whales and sperm whales are listed as endangered under the Endangered Species Act and are therefore a priority species for this project. Both fin whales sightings occurred over the continental shelf, in waters less than 40 meters (130 feet) deep, which is typical for this species in this area. All three sightings of sperm whales occurred in much deeper water, over 1,800 meters (6,000 feet) deep, which is also common for this species. A directional hydrophone that allows the team to listen for echolocation ‘clicks’ produced by whales when foraging at depth was used to locate and track the groups of sperms whales. 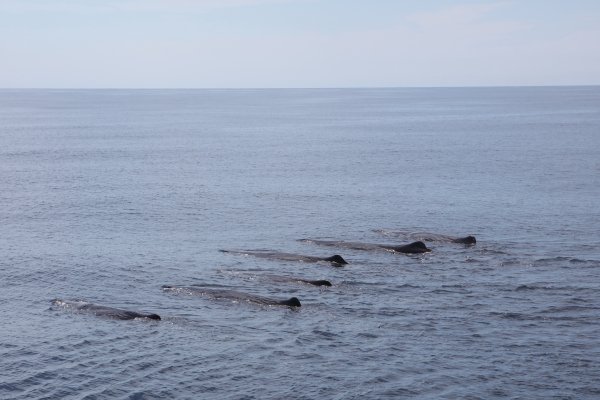 A group of sperm whales logging at the surface. Photo by Todd Pusser taken under NMFS permit 16239 issued to Dan Engelhaupt, HDR.

The researchers were able to deploy satellite-linked telemetry tags on two of the three sperm whale groups. One group was composed of three individuals and two tags were deployed on this group (one location/dive tag and one location-only tag). Another group was composed of seven individuals, including one calf, and one satellite tag (location/dive tag) was deployed on this group. Genetic samples were also collected from two of the three tagged whales. 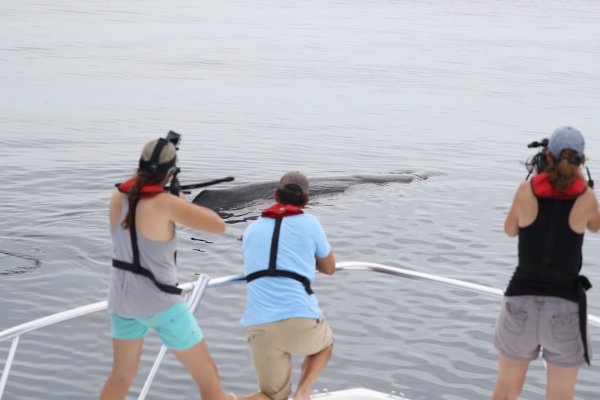 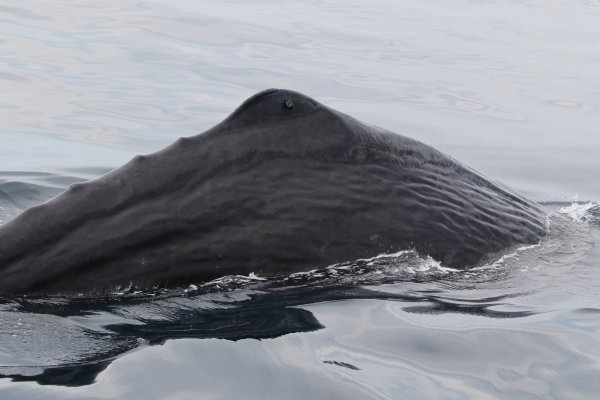 A satellite tag on the dorsal hump of a sperm whale. Photo by Amy Engelhaupt taken under NMFS permit 16239 issued to Dan Engelhaupt, HDR.

The first satellite tag was deployed on a sperm whale for this project back in February 2017. A total of seven tags have since been deployed on this species - two tags provided location-only information and five tags collected a combination of location and dive depth profiles information. The sperm whales tagged to-date have spent time in numerous offshore canyons between Maryland and North Carolina and have ranged up to 215 nautical miles from shore during tag deployments. The U.S. Navy routinely conducts training and testing activities in the Virginia Capes Operating Area (OPAREA) off the mid-Atlantic, and therefore the data collected from these tags provide valuable information on how individuals utilize habitats within this region. More information on this project can be found in it's Project Profile.