The field crew from Duke University along with the consortium of researchers in the Southeast US had a very active and exciting season working with North Atlantic Right Whales this winter.  They continued their tagging with multi-sensor acoustic recording tags, collected CTD data to help refine acoustic propagation models, and even used unmanned aerial systems (UAS), a.k.a. drones, to capture fantastic photos and video to help assess body condition, make photogrammetric measurements, and assess behavior, and even collect samples of blow for analysis. 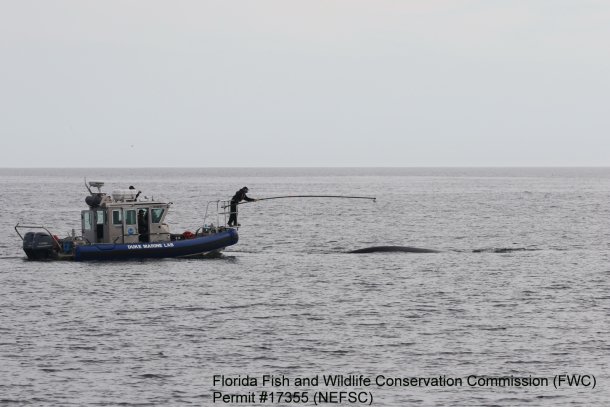 On 17 February, they headed out St. Mary’s Inlet in northern Florida with a plan to locate and tag right whales with suction cup DTags that record dive behavior as well acoustics.  It was a lovely clear day with a light breeze and good sighting conditions.  By 10:30 the Florida Wildlife Commission (FWC) survey plane had located two pairs of mother and calf right whales a couple of miles away. Once the folks on the plane confirmed the mothers’ identifications the Duke team moved into action and soon had a tag deployed on one of the moms, nicknamed Harmonia. 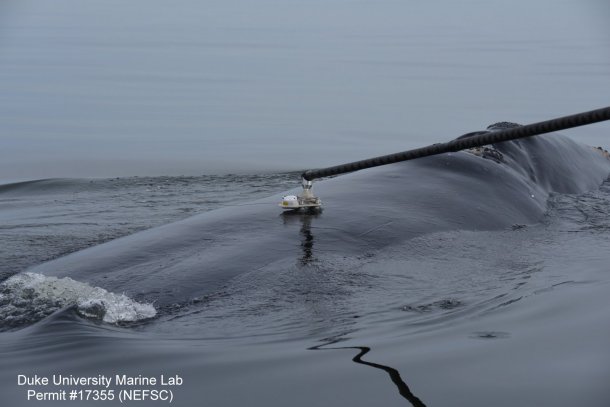 DTag being attached to Harmonia

They stayed near the pair and recorded the behavior of Harmonia and her calf and the distance between them at each surfacing.  Shortly after the tag deployment, a team from Woods Hole Oceanographic Institution (WHOI) and crew from FWC deployed an unmanned aircraft system (UAS) that flew over the mom and calf taking pictures of them in order to measure body condition.  After collecting observational data, they decided to try and locate the other mom/calf pair to attempt to tag them as well.  Having tags simultaneously on both mothers would provide the opportunity to record possible vocal exchanges between the two, as well as any vocalizations between the moms and calves. The other pair was spotted about one and half miles away and the mom was successfully tagged, nicknamed Punctuation. By 17:00 both tags had been successfully released and collected. It was a great day and it will be exciting to discover what data are on the two tags and what we can learn about the vocal behavior of mother and calf right whales. 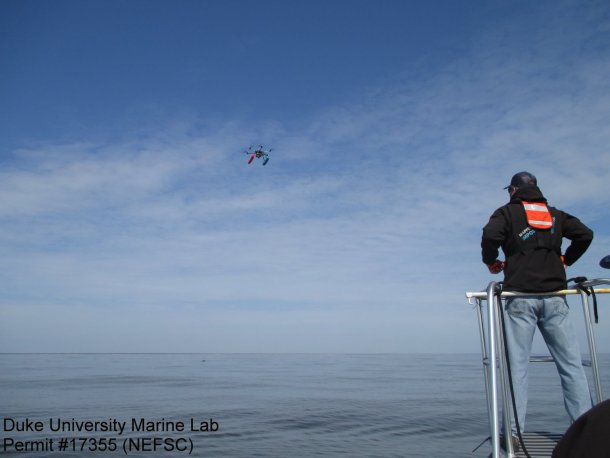 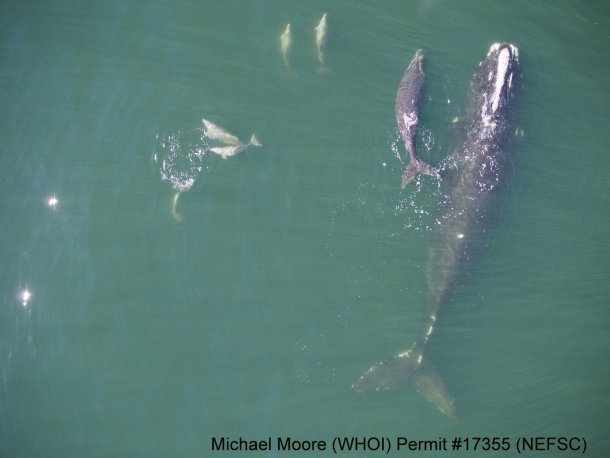 A group of dolphins near Eg3101 (Harmonia) and her calf. Note the white DTAG on the center of the mom’s back. Photo courtesy of Michael Moore, Woods Hole Oceanographic Institution, NEFSC Permit #17355.

On the following day (and final tagging day for the season) the crew spent several hours of surveying with no sightings until they overheard a communication from the FWC survey plane and another research vessel. A whale was spotted about 15 nautical miles (nm) to the south. Although they didn’t know the ID of the whale and if they could tag it, they decided to go for it anyway. By mid-afternoon they had a tag on Eg3317 and flew two UAS flights to collect excellent photogrammetry images and videos of the mom/calf pair. The tag was programmed to come off at 9:00am the following morning so the crew left the whale just before sunset and made it home just as daylight faded and returned the next morning to track the tag via VHF and collect it.

After the tag was recovered, the crew spotted Eg1968, an injured whale that had been seen on multiple days in nearshore waters along the Florida coast. The UAS team from WHOI had already collected photogrammetry images on this whale on a previous day but was unable to collect a respiratory (blow) sample. A blow sample contains hormones, respiratory microbes and other related substances that help us gauge the health of an animal. The Duke UAS team was able to maneuver the copter downwind of the whale’s blowhole and in perfect position to collect the sample. It was hard to tell how much of the mist made it onto the petri dish that was suction-cupped to the top of the UAS but they’re hopeful that it will help shed light on why this whale was in such bad shape. 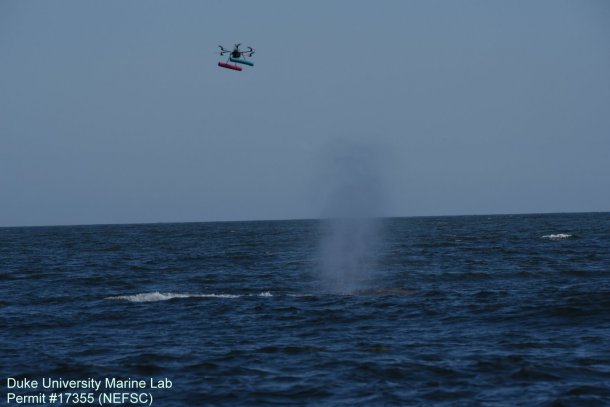 UAS being maneuvered into position to collect a respiratory (blow) sample.

For more information on this work check out the project profile.