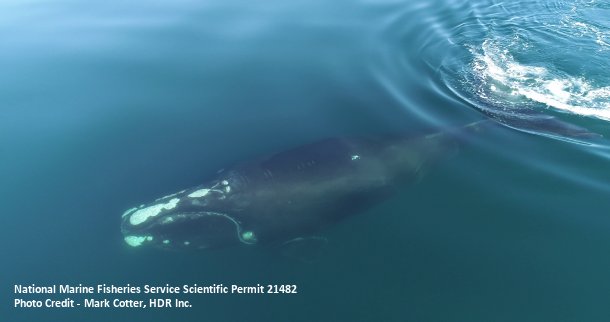 Image of an endangered North Atlantic right whale from aerial drone footage. The white patches on the whale's head are called callosities and can be used like a fingerprint to identify individuals.  The small white spot on this animal's back is actually the DTAG which is held in place with suction cups.

A team of researchers from HDR Inc. and NAVFAC Atlantic set out to conduct vessel survey on March 2 supporting the Navy's marine species monitoring program.  After several hours and a few dolphin sightings they came across a rare guest to this area - and endangered North Atlantic right whale.  The whale was first observed mid-shelf roughly off the NC/VA border. They quickly launched a drone to collect photos and video for identification to be compared against a catalog of known individuals. They were able to confirm that it was not a reporductive female, and later identified as a yearling (presumed female) first sighted on 15 Feb 2020 (2020Calfof2642).  The whale was very curious and relatively easy to approach and after making an assessment that it was not entangled nor in poor health, they managed to deployed a satellite-linked telemetry tag as well as a DTAG. The DTAG records very fine scale dive/movement data and acoustics while the sat tag will potentially track broader movements and diving behavior for up to several weeks. As of today the sat tag is still attached and transmitting - coming up on two weeks!. The whale has moved steadily north along the coast daily but seems to have settled in south of Martha's Vineyard and Nantucket. Time will tell if she moves on further north before the tag falls off or stops working. 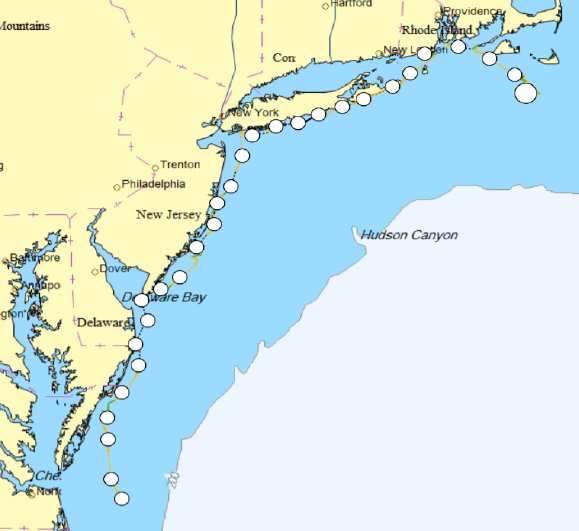 This map shows the track of the whale from the initial tagging location off the coast of Virginia up to an area south of Nantucket over approximately 13 days of traveling.

Few North Atlantic right whales have ever been tagged and tracked like this and we know very little about their movements and behavior while migrating between the southern calving habitat off the coast of Florida and the northern feeding areas.  With fewer than 400 individuals remaining in the entire population, every data point we collect is very important. 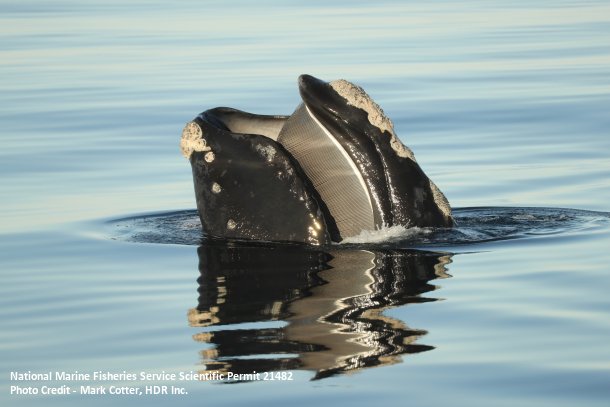 This image shows the whale "spyhopping" - a behavior where they poke their heads above the surface in order to get a better view of their surroundings.