In the western North Atlantic humpback whales (Megaptera novaeangliae) feed in high-latitude summer foraging grounds off the East coast of the U.S. and Canada before migrating to Caribbean breeding grounds in winter (Katona & Beard 1990, Barco et al. 2002, Stevick et al. 2006). Since the early 1990s, juvenile humpback whales have been documented feeding in winter in coastal waters of the mid-Atlantic states (Swingle et al. 1993). The abundance of humpback whales in the North Atlantic is increasing (Stevick et al. 2003), but there are high levels of mortality in mid-Atlantic states (Barco et al. 2002). In 2017, the National Marine Fisheries Service (NMFS) declared an Unusual Mortality Event (UME) for humpback whales along the U.S. Atlantic coast. Since January 2016, 68 humpback whale strandings have occurred, with half of the whales that were examined post-mortem showing evidence of human-activity related mortality (ship strikes or entanglement).

The U.S. Navy has supported research on humpback whales near Virginia Beach since 2014 as part of the Mid-Atlantic Humpback Whale Monitoring Project. Satellite tracking data from this project shows that the distribution of these animals overlaps significantly with shipping channels (Aschettino et al. 2018). Three dead and one live whale were observed in the 2016/2017 field season with evidence of ship strikes. Given the UME, the large number of ship-related injuries, and the high spatial overlap with shipping channels, it is essential to understand the behavior of these animals around ships at the entrance of Chesapeake Bay.

In other areas, humpbacks have relatively low responses to anthropogenic sound such as sonar, especially when compared with other species (Sivle et al. 2015, Wensveen et al. 2017). Recent work in Virginia Beach (V. Janik, University of St. Andrews, P.I.) indicates that these whales do not respond to startling sounds (V. Janik, pers. comm.) Other researchers have suggested that, when whales are engaged in feeding behavior, they are less responsive to approaching ships (Laist et al. 2001), although there is also evidence that foraging behavior is disrupted by approaching ships (Blair et al. 2016) or sonar use (Sivle et al. 2016). Therefore, these whales provide a unique opportunity to study state-dependent risk of ship strike injury and disturbance in a high-mortality area. Understanding the behavioral context in which they are most likely to both encounter and respond to ships can inform ways to change human behavior to lower the likelihood of detrimental encounters. Determining when and how these whales respond to ships can help with management directives to prevent ship strikes, improving animal welfare and human safety as well as lessening the mortality occurrence of a recovering population.

Digital acoustic recording tags (DTags) will be deployed on humpback whales in conjunction with focal follows of behavior of the tagged whales. These tags will provide the opportunity to study the whales’ three-dimensional movement and reactions to the sound of vessel approaches. The acoustic recorders on the DTAGs will collect information on the acoustic profile of the nearby large vessels, including the received levels of sound at the animal and the frequency characteristics of the ship noise. Kinematic parameters recorded by the tag will be used to categorize animal behavioral states (foraging, traveling, other) and measure direct avoidance responses. At each surfacing during the focal follows behavioral state, distance and bearing (to recreate the whale’s track), and estimated distance to the nearest ship will be recorded.

AIS data will be utilized to collect additional information on vessels, including their size, speed, and course of the focal vessel and other ships in the area. Photo-ID images of the focal whale and its associates during the focal follow and biopsy samples will also be collected. Photo-ID images will be shared with colleagues from HDR and contributed to regional catalogs. Biopsy samples will be contributed to the sample collection curated by HDR.
Initial fieldwork for this project will be conducted over a period of two months in the winter of 2018/19, during suitable weather windows. The DTags will be programmed to record for 4 to 6 hours per day, which will allow for multiple ship approaches per animal, and facilitate collection of synoptic behavioral observations. Typically, we will deploy a single tag each day, unless a tag detaches early. Fieldwork will be conducted from the R/V Richard T. Barber with a team of 4-5 individuals, including three field scientists from Duke. The Duke field team will be based in Beaufort, North Carolina and travel to Virginia Beach when weather is conducive for tagging.

Efforts will be made to coordinate DTag deployments with individuals previously tagged with longer term satellite-linked tags (SPOT or SPLASH) to provide days to weeks of movement and behavior data providing additional context for the high resolution short-term DTag deployments. Ideally, individuals will carry both types of tag simultaneously.

Seven field days were conducted int he Virginia Beach shipping lanes from January through March 2019, totaling 46 hours of survey effort.  Humpbacks were sighted on 13 occasions (n=16) and three DTags were deployed, although only two tags maintained sufficient attachment (2hrs 17min and 6hrs 29min).  Focal-follow data were collected for the duration of both tag deployments. Data are currently being processed, including using the animal’s distance and bearing from the research vessel and the research vessel’s GPS track to recreate the animals’ positions.
AIS data were collected from the R/V Barber during both tag deployments to determine the locations of all large ships during the focal follow. Distance and bearing estimates collected by the team for other vessels in the vicinity also are being processed to obtain positions of small boats that were not transmitting AIS. Finally, the SeaLink Advanced Analytics system was used to recreate large-ship tracks using AIS and radar.  A comparison of these methods will be completed before planning begins for the next field season to determine redundancies and accuracy of the systems.

Additional fieldwork will be conducted during the winters of 2019/20 and 2020/21 to increase the sample size of tagged whales for analysis. Priorities in 2020 include extending tag deployment durations (including overnight tag deployments when weather allows) and deploying DTAGs on whales equipped with satellite tags deployed by HDR Inc. The aim is that this approach will: (1) improve the accuracy of location estimates for whales that are part of the vessel-response project and (2) provide fine-scale information on the diving behavior of satellite-tagged whales. Both of these projects will contribute to ongoing efforts to understand the behavior of juvenile humpback whales in the Virginia Beach area and to better understand risk factors and develop potential mitigation measures for ship strikes. 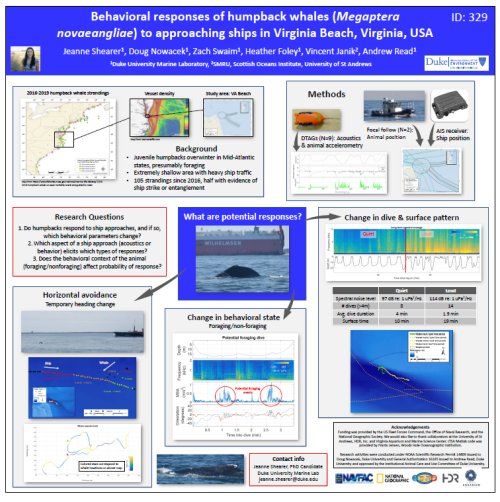