The Lower Chesapeake Bay and nearshore areas surrounding the mouth of the bay represent one of the busiest hubs of naval activity on the east coast and hosts numerous pierside facilities, bases, vessels, shipyards, and in-water training ranges. Sea turtles in the area can be potentially impacted by numerous human activities including vessel traffic of all sizes, dredging, pile driving and other activities that affect the underwater landscape and soundscape. Understanding the occurrence and behavior of animals in the vicinity of these activities is vital to mitigating potentially harmful interactions.

Currently, our understanding of marine turtle movement and habitat utilization in this region is limited, meriting further monitoring to ensure compliance with applicable environmental laws. Increased knowledge of the movements, habitat utilization, and seasonality of the marine turtles found in the Chesapeake Bay will allow the Navy to limit interactions with these protected species as well as design better mitigation measures where interactions are unavoidable.

We will be implementing a program to track juvenile loggerhead, Kemp’s ridley, and green sea turtles, all listed as threatened or endangered under the Endangered Species Act, using a combination of satellite and acoustic transmitters. Historic tag data provided by collaborating partners at the Virginia Aquarium & Marine Science Center (VAQ) collected and/or released in the vicinity of Fort Story, Little Creek, Norfolk and York River naval facilities will be included in the analysis. Satellite tags are more costly, but can generate fine scale spatial locations, and in some cases dive and environmental data, allowing for habitat and home range modeling. Acoustic transmitters rely on an array of receivers, already emplaced by the Navy, which record the date and time when animals pass nearby and ‘ping’ the receiver, generally at a range of 1km. Acoustic tags are generally smaller and less expensive than satellite tags, allowing for more deployments. However, because the location data are dependent on the receiver array, limited habitat inference can be drawn. The primary benefit of the acoustic transmitter data will be residency time and seasonality. Combination of the two tags types will yield a robust data set, providing greater insight into marine turtle use of the area.

Attempts to capture turtles will occur within the vicinity of military facilities and training areas using a 300‐600 ft tangle net and dip nets (in ocean waters in spring). Example locations include 1) between Little Creek Inlet and Fort Story; 2) between Little Creek Inlet and the Back River in Hampton; and 3) between the southern side of the mouth of the York River and the eastern side of Mobjack Bay, and in the MINEX training area.

Tangle nets can be deployed in 6‐10 feet of water for 3‐6 hours, depending on weather, tidal current and presence of non‐target species (especially bottlenose dolphins) in the area. Tangle net deployment requires two-three vessels. A larger processing vessel with shade, a vessel to approach, harass and turn groups of bottlenose dolphins away from the net (sea turtle capture is allowed as part of National Marine Fisheries Service Endangered Species Research Permit 16134 to deploy the tangle net, and VAQ’s Marine Mammal Protection Act General Authorization 17235 to harass bottlenose dolphins for research purposes), and a small inflatable to check the net and boat captured turtles.

If too few wild turtles are caught, two other options exist to deploy tags. Pound net fishers in lower Chesapeake Bay report turtles to VAQ that are incidentally caught in the nets’ open fish traps, and they can be tagged after retrieval and appropriate health assessments occur. Additionally, stranded turtles that have been rehabilitated and slated for release can be tagged. Three field seasons are currently targeted.

Data will be analyzed jointly by the Navy and Virginia Aquarium scientists. Analyses include home range estimates for individuals as well as all tagged turtles combined, residency time, a ‘ground truthing’ of the receiver array using animals tagged with both types of tags, and a habitat model, time and resources permitting. All analyses performed will utilize current GIS techniques supported by scientific literature.

Four seasons of field work have been completed during the summers of 2013-2016, however, only 2013-2015 have been analyzed for reporting.  During this time 60 VEMCO sonic tags and 28 satellite tags (9000x-SRDL, SPLASH-284A, and  SPOT-5) have been deployed on a combination of loggerhead, green, and Kemp's ridley turtles. Forty-six of the 60 acoustic tags have been detected by array receivers in the lower Chesapeake Bay (Maryland and Virginia), South Carolina, and Florida.  A switching state space model was also developed for loggerheads using tag data  that had been collected from 2007 to 2015 (pooled from previous projects in addition to the current tagging efforts) to provide a behavioral component to the detection data provided by the acoustic tags. By identifying foraging versus migratory behavior, we will be able to better understand the presence of turtles in military zones and how they might use the habitat.

The switching state-space analysis of the historic and early U.S. Navy satellite-tag data has provided a behavioral component to the track data and will inform both the U.S. Navy and state and federal protected-species managers. By identifying foraging versus migratory behavior, researchers will be able to better understand the presence of turtles in military zones and how they might use the habitat. The next steps for the satellite data are to add newer tags to the SSSM foraging analysis and conduct a similar UD/home range analysis on the points identified as migrating behavior.  Additional sonic and satellite tags were  deployed on loggerheads during 2016 and this data will be incorporated into future analyses and presented in a final project report available in early 2017. Biologists also have plans to continue to deploy satellite tags on Kemp’s ridley and green turtles in 2017 in order to build a database and conduct similar analyses for these species. 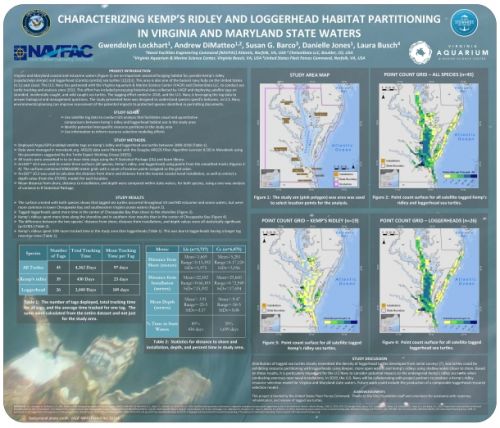