The HDR survey team observed a large assemblage of baleen whales actively foraging in the deep offshore waters beyond the shelf break during a recent aerial survey of the Norfolk Canyon study area. The team had been monitoring the remnants of a dissipating warm water mass that recently spun west off of the Gulf Stream current. This less-dense stratified warm water has the potential to create temporary thermoclines that trap nutrients from the well-mixed winter water column at the ocean’s surface. Large baleen whales are often seen where these dynamic ocean conditions occur.  With sunlight and readily available nutrients, phytoplankton organisms, which form the base of the food web, can proliferate quickly. These organisms are then readily consumed by zooplankton (including copepods and krill), which in turn are some of the main prey of these large filter-feeding baleen whales. 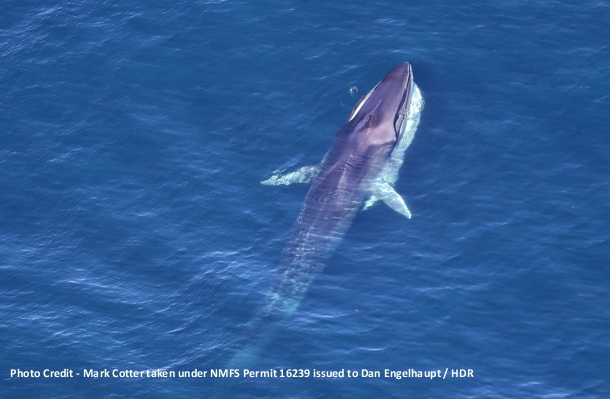 The survey team recorded 7 sightings of 35 endangered fin whales (Balaenoptera physalus) during the survey on February 10, including one sighting with 18 individuals feeding together. Among all the fin whales, another individual stood out - a single large blue whale (Balaenoptera musculus). Blue whales are considered endangered throughout the world, with the best population estimate of the western North Atlantic stock numbering about 440 individuals (Waring et al. 2011). 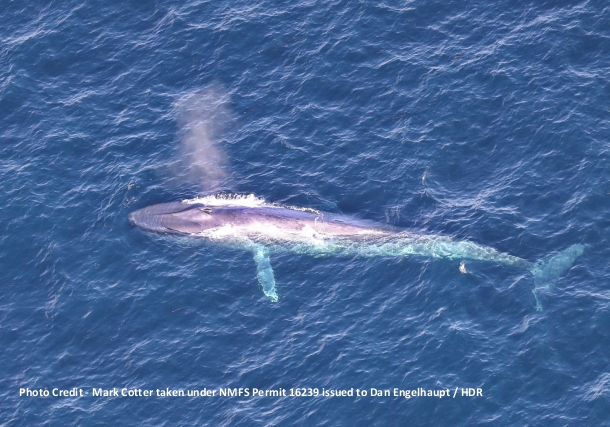 Blue whales are an infrequent visitor to the Norfolk Canyon study area.  This is only the 4th confirmed sighting on record in the U.S. mid-Atlantic waters south of New Jersey (based on records from the Ocean Biogeographic Information System Spatial Ecological Analysis of Megavertebrate Populations [OBIS-SEAMAP]). One of these four sightings, made by the HDR vessel survey team in April 2018, was a juvenile feeding on the shelf northwest of Norfolk Canon along with North Atlantic right whales, humpback whales, and fin whales (see previous blog post).  In 2015, two satellite-tagged female blue whales from the Gulf of Saint Lawrence moved into offshore waters of the Mid-Atlantic Bight during the months of December to March, but far from the edge of the continental shelf (Lesage et al. 2017).  One of these whales then transited along the edge of the continental shelf off Virginia through the study area and right past Norfolk Canyon.

Fin and blue whale sightings in the vacinity of the Norfolk Canyon on Feb 10, 2019.

As for the recent sighting by the HDR survey team - we recieved  some interesting news after reaching out to colleague Richard Sears from the Mingan Island Cetacean Study (MICS) in Quebec, Canada. It turns out this individual is a match to their photo-identification catalog, and is known to them as a putative female due to the presence of multiple associated calves. The whale was first identified 14 years ago, and up until now was only known from the MICS Gulf of St. Lawrence, Canada study area (pers. comm. Richard Sears, MICS).

Aerial surveys will continue through the spring in the Norfolk Canyon study area and will coordinate with the Mid-Atlantic Outer Continental Shelf Break Cetacean Study to support additional research priorities such as satellite tagging and biopsy sampling.