In October 2005, the U.S. Department of the Navy proposed the installation of an Undersea Warfare Training Range (USWTR) in Onslow Bay off the coast of North Carolina for the purpose of anti-submarine warfare training using mid-frequency tactical sonar (1-10 kilohertz [kHz]). As part of a multi-institutional monitoring plan for Onslow Bay, an acoustic monitoring effort was initiated in 2007 by Duke University with assistance from Scripps Institution of Oceanography. In 2008, the preferred site for the USWTR was changed to Jacksonville, Florida. While acoustic monitoring continued in Onslow Bay, it also began in Jacksonville in 2009, once again led by Duke University with assistance from Scripps Institution of Oceanography. In broad support of Atlantic Fleet Training and Testing, acoustic monitoring later expanded to an area off Cape Hatteras, North Carolina (2012), and near Norfolk Canyon, off the coast of Virginia (2014). The primary objectives of the passive acoustic baseline monitoring project are to:

High-frequency Acoustic Recording Packages (HARPs; Wiggins and Hildebrand 2007) are utilized to collect acoustic data in each location. The HARP data-logging system includes a 16-bit analog-to-digital converter and single hydrophone suspended 10-20m above the seafloor.  The hydrophone includes both high- and low-frequency elements to detect the vocalizations of both odontocete and mysticete cetaceans. The data logger is capable of sampling up to 200 kHz and can be set to record continuously or on a duty cycle to accommodate variable deployment durations. Early deployments recorded on a variety of duty cycles but all deployments have been set to  record continuously since 2012. These instruments combine high- and low-frequency hydrophone elements to detect the vocalizations of both mysticete and odontocete cetaceans, including clicks of many odontocetes.

Each HARP dataset is manually scanned for marine mammal vocalizations and anthropogenic sounds using the “logger” version of Triton (Hildebrand Lab at Scripps Institution of Oceanography, La Jolla, California). Automated computer algorithm detectors are also used to analyze the data. The effective frequency range of the HARP data (10 Hz–100 kHz) is typically divided into three parts for analysis: 10–1,000 Hz, 10–5,000 Hz, and 1–100 kHz. Specific details on analysis methods used for individual species can be found in annual summary reports as well as technical reports for each deployment.

Over 50 HARP deployments have been made since 2007 across multiple locations across the AFTT study area. Details for all previous and current HARP deployments in the Atlantic as well as analysis technical reports can be accessed online on the HARP deployment explorer. Although the baseline occurrence data collection component of the monitoring program is being phased out, with retrieval of the last HARP deployment expected in summer of 2022, the data has been contributed to a variety of databases and is continuing to be analyzed to support more advanced assessments of species ecology and noise impacts, particularly through a collaborative project with NOAA's Northeast Fisheries Science Center - Analysis of Acoustic Ecology of North Atlantic Shelf Break Cetaceans and Effects of Anthropogenic Noise Impacts. 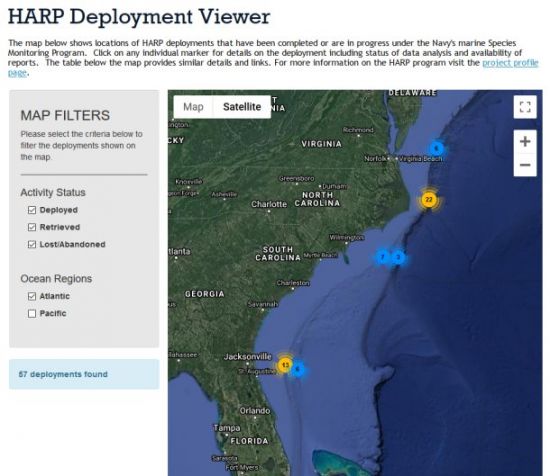