Haul-Out Counts and Photo-Identification of Pinnipeds in Virginia

Harbor seals (Phoca vitulina) and gray seal (Halichoerus grypus atlantica) are year-round coastal inhabitants in eastern Canada and New England, and occur seasonally in the mid-Atlantic United States (U.S.) between September and May (Hayes et al. 2020). Until recently there hadbeen some debate about the southern range extent for these stocks in the Western North Atlantic. In Virginia, reports from local anglers, Chesapeake Bay Bridget Tunnel (CBBT) staff, and the Virginia Aquarium & Marine Science Center have indicated that seals have been using the CBBT rock armor or "islands" to haul out on for many years, but in increasing numbers over the last decade.  Additionally, annual pinniped stranding numbers have increased in Virginia since the early 1990s (Costidis et al. 2019).

Until 2018, NOAA Stock Assessment Reports (SARs) indicated that the gray and harbor seal populations range from New Jersey to Labrador; with scattered sightings and strandings reported as far south as North Carolina for gray seals and Florida for harbor seals . Other researchers, report that harbor and gray seal distribution along the U.S. Atlantic coast appears to be expanding or shifting (DiGiovianni et al. 2011, Johnston et al. 2015, DiGiovianni et al. 2018). The apparent range expansion of harbor seals may be due to the rapid growth of gray seal populations in Canada and Northeastern U.S. (Cammen et al. 2018; Pace et al. 2019; Wood et al. 2019).

Within the last decade, harbor seals have been observed returning seasonally, from fall to spring, to haul-out locations in coastal Virginia, and gray seals are also occasionally observed during the winter, but not on a consistent basis (Ampela et. al. 2019; Jones and Rees 2020).

This study aims to document seal presence at select haul-out locations in the lower Chesapeake Bay and coastal waters of Virginia, which are important areas to Navy training and testing activities. Haul-out counts and photo-identification (photo-ID) methods are being utilized in order to acquire a better understanding of the seals’ seasonal occurrence, habitat use, and haul-out patterns in this area. This study will provide valuable baseline information for the future assessment of seal movement, site fidelity and relative abundance in the mid-Atlantic region.

A series of systematic, counts of all seal species will be conducted at two different survey areas; 1) in the lower Chesapeake Bay along the CBBT, on the four “islands” (referred to as CBBT 1, CBBT 2, CBBT 3, and CBBT 4), and 2) on the southern tip of the Eastern Shore, at five main haul-out locations. Vessel-based counts will be conducted at the CBBT (in collaboration with Virginia Department of Game and Inland Fisheries and HDR, Inc.) and Eastern Shore (in collaboration with The Nature Conservancy) survey areas. The number of seals hauled out and in the water will be recorded during each count throughout the season. Photographs of seals will be collected between counts for photo-ID for a mark-recapture study to estimate the local population abundance, and to develop a local catalog. The use of unmanned aircraft systems (e.g. drones) at the Eastern Shore survey area was added in 2018 to help improve count accuracy during vessel-based point counts and assess the distribution of pinnipeds in the region.

A population abundance for harbor seals has been estimated for the study area using mark-re-capture data and the Lincoln-Peterson model. A total of 170 individuals were estimated as the average abundance across all five seasons (2015-2020). Abundance estimates were also calculated for each field season from 2015-2020 using the mark-recapture data as well as from 2016-2020 using an experimental approach incorporating seal count and satellite telemetry data (Huber et al. 2001; Thompson et al. 1997). Abundance estimates produced from the mark-recapture data ranged from 81 (95% CI: 44.14-117.19) to 242 (95% CI: 91.35-392.65) individual harbor seals; whereas the estimates calculated using the telemetry correction factor were slightly higher in comparison for most seasons and ranged from 143 individuals (95% CI: 0 - 388.05) to 226 individuals (95% CI: 52.67 - 398.35). The margin of error was larger for the abundance estimates produced using the experimental approach; potentially due to small sample sizes for both count and telemetry data for this type of calculation. A fluctuation in abundance estimates occurred across seasons for both approaches and regression analysis results indicate there is not a statistically significant trend in population abundance. Therefore, there is reason to believe that the population of animals utilizing the lower Chesapeake Bay and Eastern Shore, Virginia may be relatively stable.

Photo-ID analysis results identified 121 unique individuals from the 2015-2020 field seasons. Of the 121 individuals, 75 (62%) were observed only once and 46 (38%) were determined to be present in the study area on more than one occasion across the 5 field seasons, indicating at least some degree of seasonal site fidelity in the lower Chesapeake Bay and coastal Virginia waters. More than half of the identified harbor seals (58%) have been sighted at only the CBBT survey area, with a smaller percentage (36%) sighted at only the Eastern Shore survey area. Eight individuals were re-sighted at both survey areas on separate survey days within a season and across seasons. These results indicate that harbor seals make localized movements throughout the region during their seasonal occupancy and that while some seals may be utilizing a particular haul-out site within a given season, others may utilize multiple haul-out sites within a season.

Haul-out counts and photo-ID data collected for the 2020/2021 field season at both the CBBT and Eastern Shore survey areas are currently being analyzed and additional survey work is planned for 2021/22. 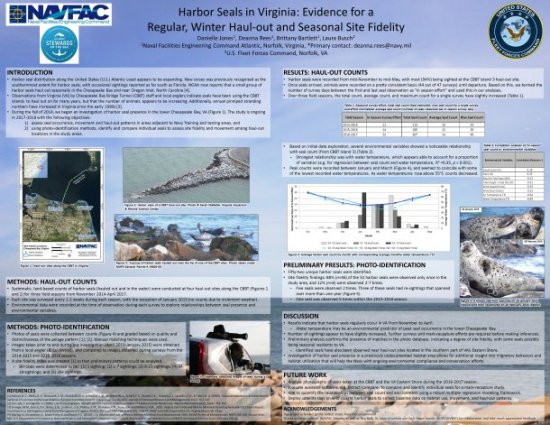