The lower Chesapeake Bay and Virginia nearshore waters represent one of the busiest hubs of naval activity on the east coast and hosts numerous pierside facilities, bases, vessels, shipyards, and in-water training ranges. Seals seasonally inhabiting and transiting through these areas could be impacted by military activities including vessel traffic of all sizes, dredging, pile driving and other activities.  Understanding seals’ habitat use in the vicinity of naval activities is critical to mitigating potentially harmful interactions and obtaining appropriate environmental permits. The information gathered from this project will provide valuable baseline data needed for the future assessment of seal movement and site fidelity along the Mid-Atlantic coast and especially for in-water training associated with Joint Expeditionary Base (JEB) Little Creek-Fort Story, and Naval Station Norfolk and Naval Air Station Oceana - Dam Neck Annex.

Navy biologists have been researching seal occurrence in the region since 2013 and conducting systematic haul-out counts in the region since 2014. The information and data collected to date indicate that seals are probably utilizing the area to a much greater extent than previously thought, and that there is a regular seasonal occurrence of seals in the region between fall and spring. Based on previous Navy research efforts, citizen science, and stranding records, the species that could be included in this effort are predominantly harbor seals, as well as grey seals, and on rare occasions, harp seals. While there is an improved understanding of the seasonality of seals to the region at certain haul-outs, there is a void of information on the movements of individuals within the region, their migratory pathways, or habitat use on a broader spatial scale, which merits further monitoring.

This project is being undertaken to understand seal movement in the area, to determine when seals migrate in and out of the region, and where they migrate to in the spring and summer. Increased knowledge of the movements, habitat utilization, and seasonality of seals found in the lower Chesapeake Bay and Virginia coastal waters will allow the Navy to limit interactions with these protected species, design better mitigation measures where interactions are unavoidable and obtain the appropriate authorizations to maintain environmental compliance.

The project focuses on capturing, tagging, and releasing healthy harbor seals (adults if possible) at one of their known haul-out sites in southeast Virginia. The tags utilized are Wildlife Computers satellite-linked tracking tags (combination of SPOT6, SPLASH10, and SPLASH10-BF). The SPOT6 tag is a position-only tag that tracks the seals’ general movements, and when they come out of the water onto land (“haul out”). The SPLASH tags utilize depth sensors to record dive data which is used to infer foraging behavior. The SPLASH10-BF tags add Fastloc GPS technology (Wildtrack Telemetry Systems) to acquire fine-scale movement data.  VEMCO acoustic transmitter tags were also used during the first field season will no longer be deployed on seals for future tagging efforts.

Researchers attach satellite-tracked tags to seals using methods consistent with similar projects conducted on these species, and in accordance with all stipulations of NMFS permit # 17670. A suite of biological samples are collected in accordance with permit stipulations, which may include scat, blood, blubber (via biopsy), vibrissae, and fur.

Seven harbor seals were successfully tagged in February 2018 with both satellite-linked and VEMCO acoustic transmitter tags. Data from the satellite-linked tags is available on Movebank.org, and a report on the 2017-2018 season is available (Ampela et al., 2019). No tags were deployed during the 2018-19 field season, and two individuals were successfully captured and tagged in February 2020. No field work took place in 2021 as a result of the COVID-19 pandemic. A final tagging session is currently being planned for early 2022. 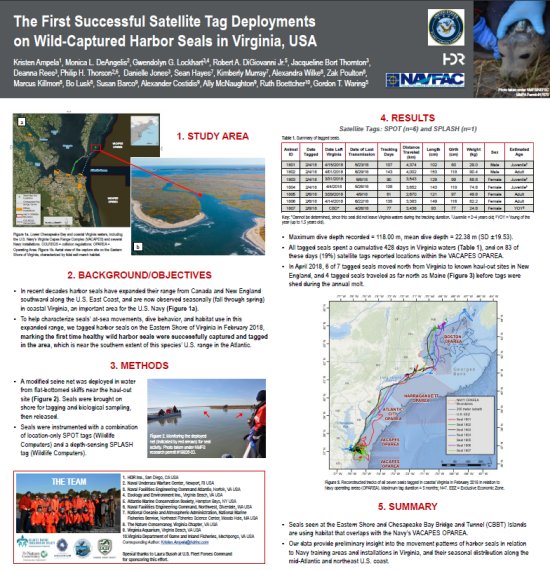