Building on Navy-supported research and monitoring efforts from a variety of locations, the Atlantic Behavioral Response Study (Atlantic-BRS) was designed to measure the behavioral responses of deep-diving odontocetes to controlled exposures of mid-frequency active sonar (MFAS). This project, which was initiated in 2017, is being conducted off Cape Hatteras, North Carolina in areas where extensive previous monitoring efforts have documented the occurrence and baseline behavior of several key species using various sampling methods (e.g., surveys, photo ID, animal-borne tags, passive acoustics). A research collaboration lead by the Duke University Marine Laboratory demonstrated the ability to consistently find and tag large numbers of both Cuvier’s beaked whales (Ziphius cavirostris), a species of high Navy interest in terms of potential MFAS effects, and short-finned pilot whales (Globicephala macrorhynchus). Additionally, this site is positioned relatively near (<100 nm), but not within, the highest concentration of operational MFAS sources used during training and testing operations in the Atlantic (e.g. SQS-53C-equipped combat vessels) based out of Norfolk, VA. The Atlantic-BRS is generating data in a new geographic area and is substantially increasing the currently limited sample size of the behavioral response of key species to Navy tactical sonar. Furthermore, the project is expanding the temporal and spatial scales over which potential responses are measured compared to previous BRS efforts by integrating satellite-linked time-depth recording tags (SLTDRs) with short-term, high-resolution acoustic digital archival tags (DTAGs) for the first time in experimental conditions where key aspects of exposure context are known and controlled.

The primary objective of this project is to conduct controlled exposure experiments (CEEs) with tagged beaked and pilot whales exposed to Navy MFAS signals. The highest priority objective is to conduct CEEs using operational 53C sonar from real Navy vessels through direct coordination with Naval assets during ongoing training operations. Simulated MFAS from an experimental sound source is used when vessels are unavailable during periods when whales are tagged are. This project is ongoing, with three field seasons completed and one or several more are planned. Earlier baseline tagging efforts and the concentrated field effort during this project have yielded the largest sample size of tagged Cuvier’s beaked whales and incidental sonar and CEE data with MFAS sources obtained to date anywhere in the world. Subsequent field effort is ongoing and required to increase sample sizes with operational Navy vessels, now focusing on specific experimental objectives based on results to date using experimentally simulated MFAS and limited CEEs with operations vessels.

Deliberate measures have been taken to maintain experimental consistency with previous BRS projects, in order for results to be considered and integrated across sites. Such consistency will allow comparisons to be drawn among studies and support meta-analyses needed to derive dose-response probabilistic functions for application in requisite Navy environmental compliance assessments. Given the coordination required with Navy combat vessels equipped with SQS-53C sonar systems for BRS efforts off Hatteras, the overall experimental design was based primarily on the methods employed in the southern California behavioral response study (SOCAL-BRS), with modifications associated with the novel use of both SLTDRs and DTAGs. This includes a period during which baseline behavioral data are collected prior to the CEE (at least 60 min for DTAG whales and 24 h for SLTDR whales). Pre-exposure baseline behavioral data collection primarily involves data from tag sensors, supplemented by focal follows of tagged animals by observers in small boats, which are maintained during the pre-exposure baseline, exposure, and post exposure periods.

Sonar transmissions during CEEs occur using identical protocols as in the SOCAL-BRS. For real Navy sonars, this includes transmission of full power (235 dB (RMS) re 1 µPa) signals of a constant nominal 53-C waveform type transmitted with a 25s duty cycle, and with ships transiting in a direct course at a speed of 8 kt. Transmissions occur for a maximum of 60 minutes, unless any strong contra-indicators from the field team dictate a shut-down of the sound source. Starting positions and course for vessels are determined using in situ propagation modeling given the position of a focal animal using the Navy-consistent models and unclassified databases in software developed and provided by the Naval Postgraduate School (NPS). The course of the vessel results in an escalation in received level at focal individuals based on the ship's movement generally (but not directly) toward individual whales. For simulated MFAS experiments, the 15-element vertical line array source transmits signals with similar spectral and temporal parameters from a stationary (drifting) position ramped from 160 to 212 dB (RMS) re 1 µPa. The position is selected as well using the NPS in situ modeling to result in comparable received levels for focal whales. Given the relatively large number of tagged individuals exposed during CEEs (in some cases up to ten individuals per CEE), individuals will have a varied exposure history of range and received level. Target received levels for the focal animals range from 130-160 dB RMS with higher target levels for pilot whales than beaked whales based on both other studies and our early experimental results. This experimental design will allow for positioning of sonar sources to result in target received levels at focal individuals that are also being monitored directly using other methods (focal follow, photo ID). However, this also results in a diversity of received levels for non-focal individuals at positions and (generally greater) horizontal ranges that are known but not necessarily controlled.

The analyses focus on how beaked and pilot whales respond to MFAS exposure, in terms of: (a) potential avoidance behavior; (b) potential changes in behavioral state; and (c) potential changes in social behavior. Analyses are transitioning and applying methods developed in other BRS studies and the earlier MOCHA and ongoing DOUBLE MOCHA projects. Short- and longer-term consequences of disturbance are being evaluated separately using established analytical methods for short- and medium-term tags. However, the multi-scale nature of this study offers a unique opportunity to explore how these methods may complement one another and how high-resolution, short-term response data may inform methods used for longer-term monitoring.

Four field seasons, spring through summer, of this multi-year project have been completed from 2017-2020.  A total of 44 tags of both types have been deployed on Cuvier’s beaked whales and 45 total tags have been deployed on pilot whales. Fourteen CEEs have been conducted, three of which involved operational US Navy vessels with 53-C MFAS sources (USS MACFAUL, USS NITZE, USS RAMAGE), nine involved simulated MFAS sources, and two of which were no-sonar control CEEs. These 14 CEEs have resulted in a total of 62 unique tagged animal exposure events for the highest priority Cuvier’s beaked whales and 60 unique events for pilot whales.

The analysis of this large data set is complex, extensive, and ongoing. Existing analytical approaches are being applied to these data, with novel integration on different time/space scales. In addition, a new paradigm of spatial analysis has been developed to address errors associated with position estimates from the satellite tags and consequent implications for modeling received noise during CEEs.  We are currently analyzing potential responses using several methods to investigate subtler potential responses, to the extent possible given the resolution of available data. Additional data involving operational sources are required to complete the planned analyses of spatial and temporal factors (such as range-received level interactions).

Multiple peer-reviewed papers from this project have already been published on key methodological developments and aspects of baseline behavior, with more than a dozen others in review or advanced stages of development. In addition, many aspects of this project have been presented at public forums and scientific meetings worldwide including the World Marine Mammal Conference in Barcelona, Spain in December 2019.

Additional information including supplementary material on analyses and results can be found on the Atlantic BRS project web page. 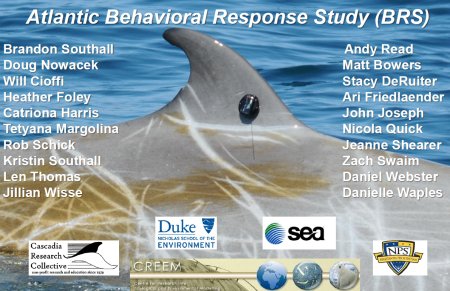